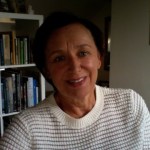 Pauline Hadaway has worked in arts and education since 1990 and is co-founder of The Liverpool Salon, a new forum for public debate on Merseyside. Pauline was Director of Belfast Exposed gallery of photography (2000-2013) and now works as an independent researcher and copy editor. A Research Associate with Digital Women’s Archive North, Pauline was Researcher in Residence with the National Cooperative Archive, Holyoake House, Manchester (2015-2016). For her doctoral research at the University of Manchester, Pauline is currently exploring different uses of arts, heritage and culture as tools for peace building in Northern Ireland. Pauline has been published widely including: ‘Policing the Public Gaze’ (2009); ‘Re-imagining Titanic, re-imaging Belfast’ in ‘Relaunching Titanic: Memory and Marketing in the ‘Post Conflict City’ (2013) and ‘Escaping the Panopticon’ in Photography Reframed to be published in 2017.

Mark Alan Hewitt -one of the speakers at the next @LiverpoolSalon - talking about Beauty as a vital concern for tho… twitter.com/i/web/status/1…

Thanks for the invitation to contribute on Callaghan and Northern Ireland. Those years were decisive moments that r… twitter.com/i/web/status/1…